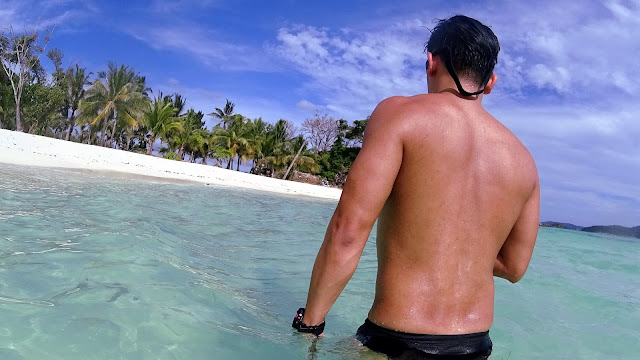 This was my third trip to Coron and I still feel that I haven't scratched the surface of exploring the islands of the Calamianes Group fully. The trip was itself delayed for two weeks because of the cancellation caused by the APEC event, but the airline (we flew Skyjet Air) was able to rebook it two weeks later.

There were noticeable changes in Coron since the last time I was here. The pueblo was busier, and there are more buildings and establishments around (fortunately not as bustling as Boracay with that Laboracay nonsense). The boat operators that give tours around the islands somehow also managed to standardized the fees and the destinations so you can just pick and choose where you want to go, like from the menu at a local burger joint.

For the first day I explored stayed around the town, with a quick climb to Mt. Tapyas, and a to the Maquinit hot springs early in the evening to soothe tired muscles after that climb. We did Malcapuya Island, Bulog Dos and Banana Island on the second day.  I also  decided to do Kayangan Lake (a must for first time visitors) and its environs for the third day, including CYC Beach, the Coral Garden, Kalachuchi Beach and the Hidden Lagoon

I contacted a local tour group and signed up for the Malcapuya Island tour, which includes Bulog Dos and Banana Island. There were six of us in the boat, me,  another Filipina, and three Chinese tourists. We set out around 9 am, and the trip to the first island took around an hour or so.

The first stop was Bulog Dos (it's neighboring island, Bulog, is a private island). There was a sandbar that connects the two islets, a strip of white sand framed by the azure sea on both sides. We docked a few meters from the beach, and we had to wade through the water to get to dry land. I didn't stay long there; the water was so inviting that I was like a puppy frolicking on the beach. There were a handful of tourists there as well, but not that many to crowd you out. I them climbed up the small hill to an overlooking cliff that gives you a bird's eye view of the sandbar and the other island. So far so good.


The next island in the itinerary is called Banana Island. I didn't see any banana shrubs on it, only coconut trees, though. We spent a longer time here, since we were going to have our lunch in one of the nipa huts dotting the beach. Our boatmen/tour guides began preparing our lunch - grilled chicken, steamed rice, pineapple slices, and eggplant salad, paired with Coke (they come together with the tour fee) - while we explored the beach further. We went back just as the meal was served, which we consumed with gusto.

The last island of the tour is easily my favorite - Malcapuya Island. It looked so pristine - like a small Boracay before the tourists came. The sand is also whiter than that of Banana Island, although I think the sand in White Beach is finer. Still, it looks so pretty that Anakin Skywalker would even complain about it. I spent the most time here, swimming and playing on the beach, getting too many selfies at times.

We called it a day just before the sun was to set. The trip back was a bit rougher, as the waves were bigger and the sky was a bit overcast. It even rained at one point, and that coupled with the sea spray got us cold and wet in no time. We reached the port just before twilight.

The next day we signed up for another tour, this time covering Coron Island, plus several beaches and snorkeling sites around it. There were also only six of us in the boat, plus the two boatmen.

The first stop was the Coral Garden. The boat just anchored over a large coral reef, and we were allowed to snorkel. I swam around, testing my Sony ActionCam under water. I wasn't wearing any flippers so it kind of difficult to move around while clutching a selfie stick in front of me.

I enjoyed the next destination more. CYC Beach, as it is called, is partly submerged, but only for a foot or so in some places. The water is so clear and almost transparent,  with a tinge of aquamarine, making the boats look like they were floating on glass. I spent a lot of time here swimming and taking pictures. 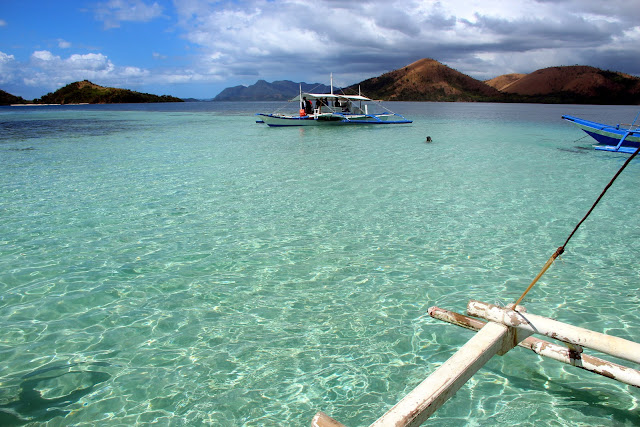 The next stop is Kalachuchi Beach, which is nestled on the side of Coron Island. It is named after the kalachuchi plant that grows along the beach.

At first we docked at the coral reef further out the beach to snorkel and to wait for the other tourists to clear the area. I tried skin-diving down the reef wall, and I really wished that I am scuba-diving that moment as I can only go down for several feet. We docked to the beach when a hut became available, and we had our lunch there, composed of grilled fish, eggplant salad, and steamed rice.

After lunch we headed to the Hidden Lagoon. Karst formation surrounds the reef in the area, making it like a semi-enclosed lagoon. The water is also so clear that you can clearly see the corals below the pristine water, mottled over the surface like lichen. We snorkeled again, enjoying the waters around it. We can feel the thermocline here too, alternating between cold and warm. At one point I felt a fish bite my leg, which was rather disconcerting. I thought for a second I was bitten by a snake. 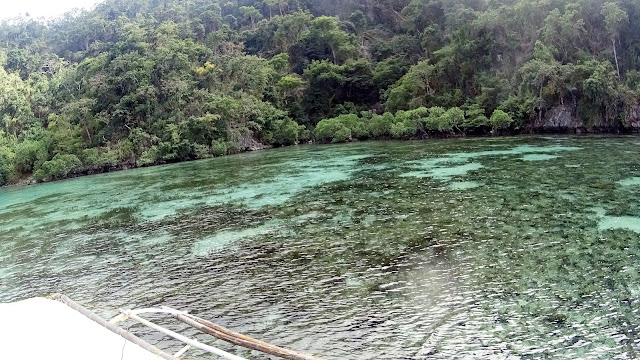 The last destination of the day was familiar to me as I've been there twice already - Kayangan Lake. Third time is still a charm, I discovered. The guide took me to the caves located at the side of the limestone cliffs, as the others went to the bamboo raft in the lake.


I did go inside the small cave, following the lead of the boatman. I didn't feel claustrophobic but I was wary of the sharp rocks protruding on the sides. I wasn't very adventurous this time as I declined the boatman's invitation to swim through a small opening that opens to another cave on the other side. I didn't feel I had the air to do that.

After exploring the caves I joined the rest of the group in the bamboo raft. We just lay there, watching the raft drift across the freshwater lake, watching the world go by, listening to the distant calls of birds as they cackle in the trees. It was a great day. 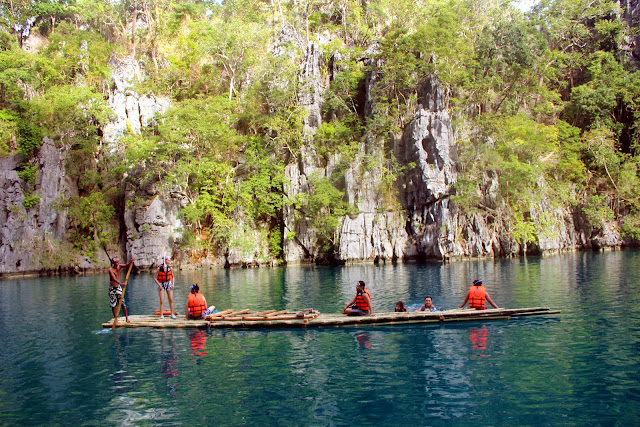 How to get there:
Getting to Coron is easier these days. You fly from Manila to Busuanga, then take a van from from the airport to Coron, 150 pesos each way. The route is serviced by many airlines, including Cebu Pacific, PAL Express, and Skyjet Air.

Tours to the islands are now standardized so you can pick and choose the places that you want to explore. Prices start at around 600 pesos. For a general guide to Coron, go here.
beaches Bulog Dos Calamianes Group of Islands Coron islands Kayangan Lake Malcapuya Palawan Philippines