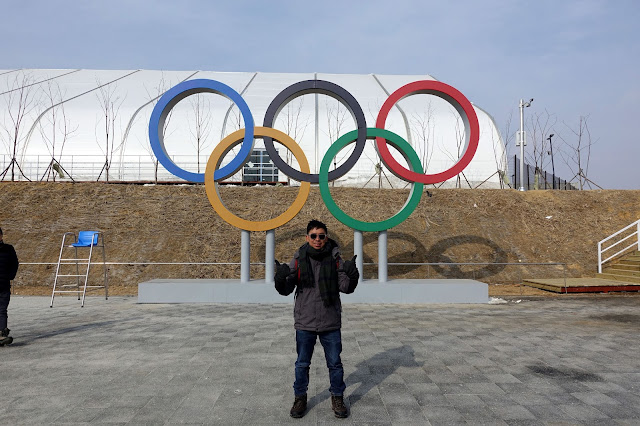 I went to South Korea last February 8 to specifically attend the 2018 Pyeongchang Winter Olympics. The quadrennial event is being held at the city of Pyeongchang and nearby winter resorts. I've always wanted to see an Olympic event, and this is my first time to witness one (Rio 2016 was a lost opportunity). I was excited to say the least.

The winter edition of the Games are for sports practiced on ice and snow (duh), and although it has a smaller number of participants and overall number of events - 102 events and 15 sports - the winter games resonated to me as much as the summer edition, especially since I've watched Cutting Edge a while back (cheesy I know, but...). I've also been dipping my toes in winter sports, such as snowboarding (in Gudauri and Hakuba) and skiing. I've also watched live hockey games in the US, so the events have some familiarity with me.

Pyeongchang is located about 180 kilometers east of Seoul, and I traveled there using the Korail KTX high-speed trains. I actually did not stay in Pyeongchang, but rather commuted by rail every time I go there, with the trip taking an hour and half each way.

As the Philippine Olympic Committee did not sell any tickets in Manila I have to get my tickets in Pyeongchang itself, which means going to the ticket booth in the Olympic Stadium and queuing for an hour in sub-zero temps. I managed to get tickets to visit the Olympic Stadium and Park, as well as to attend a medal event - 10 kilometer men's biathlon sprint. I wanted to see snowboarding and curling, but the tickets got sold out on the days I was in South Korea. Pet peeves: tickets are either purchased by cash or by using a Visa card, as Visa is a worldwide sponsor of the Games. They are expensive too; the biathlon event cost around USD 100.

Getting tickets to the opening ceremonies is next to impossible (and expensive too), so I passed on that one (I instead followed the opening ceremonies on live stream while visiting the DMZ). The next best thing was to visit the Olympic park, which I did. The stadium where the opening ceremonies were held is pentagonal in shape; the temporary structure, which will be demolished after the Games, can hold 35,000 spectators. Around it are art installations, pavilions from sponsors, such as Samsung, a humongous gift shop (snagged a few souvenirs there), and of course, the Olympic torch. I spent most of the day exploring the park and the nearby village, braving the sub-zero temps and the snowy weather.

The only live event that I have attended was the ten-kilometer men's biathlon sprint, which was also a medal event. It was held in Alpensia Biathlon Center, inside the Alpensia winter resort. The biathlon center is accessible by a 20-minute bus ride from the Jinbu KTX station, which is about 8 minutes from Pyeongchang by train.


Biathlon combines cross-country skiing and rifle shooting. Competitors would race around a set track in three laps, and in each interval will attempt to shoot five targets in the shooting range. Penalty laps are added for every missed target, and the biathlete with the fastest time around the track wins. I imagine the sport to be a very stressful one, switching from skiing downhill and uphill in temperatures below zero at times, to having a steady pulse while shooting at targets in prone and standing positions. That and having your competitors at your tail too.


There was no team for me to root for particularly, but I manage to identify some national groups who were there to cheer for their team. I noticed the Russian fans were exceptionally boisterous, considering that Russia was banned in this Olympics due to doping, and that Russian athletes are playing under the banner of OAR - Olympic Athletes from Russia. In the end it was the German athlete, Arnd Peiffer, who won the gold, followed by Michal Krcmar from Czech Republic, and Dominic Windisch from Italy, who got the bronze.

Wrap-Up
All in all it was a great experience for me - the historical for attending an Olympic Games, and also having it as a learning experience and dry run for the 2020 Tokyo Olympics. I learned a great deal on how the events are scheduled, and how tickets are obtained. I also met some Olympians, such as the German women's bobsled team. I've always looked up to Olympians as role models for sportsmanship and athletic prowess (apparently not the Russian dopers who got caught).

Getting There
As I did not stay in Pyeongchang during the Games, but I took the KTX train from Seoul to the event locations every time. I got a 5-day rail pass, which cost around PhP 9000. I thing it was a good deal, especially I also used it to go to Incheon Airport from Seoul on the day I left, as well as having several round-trip rides from Seoul to Pyeongchang and Jinbu as well.